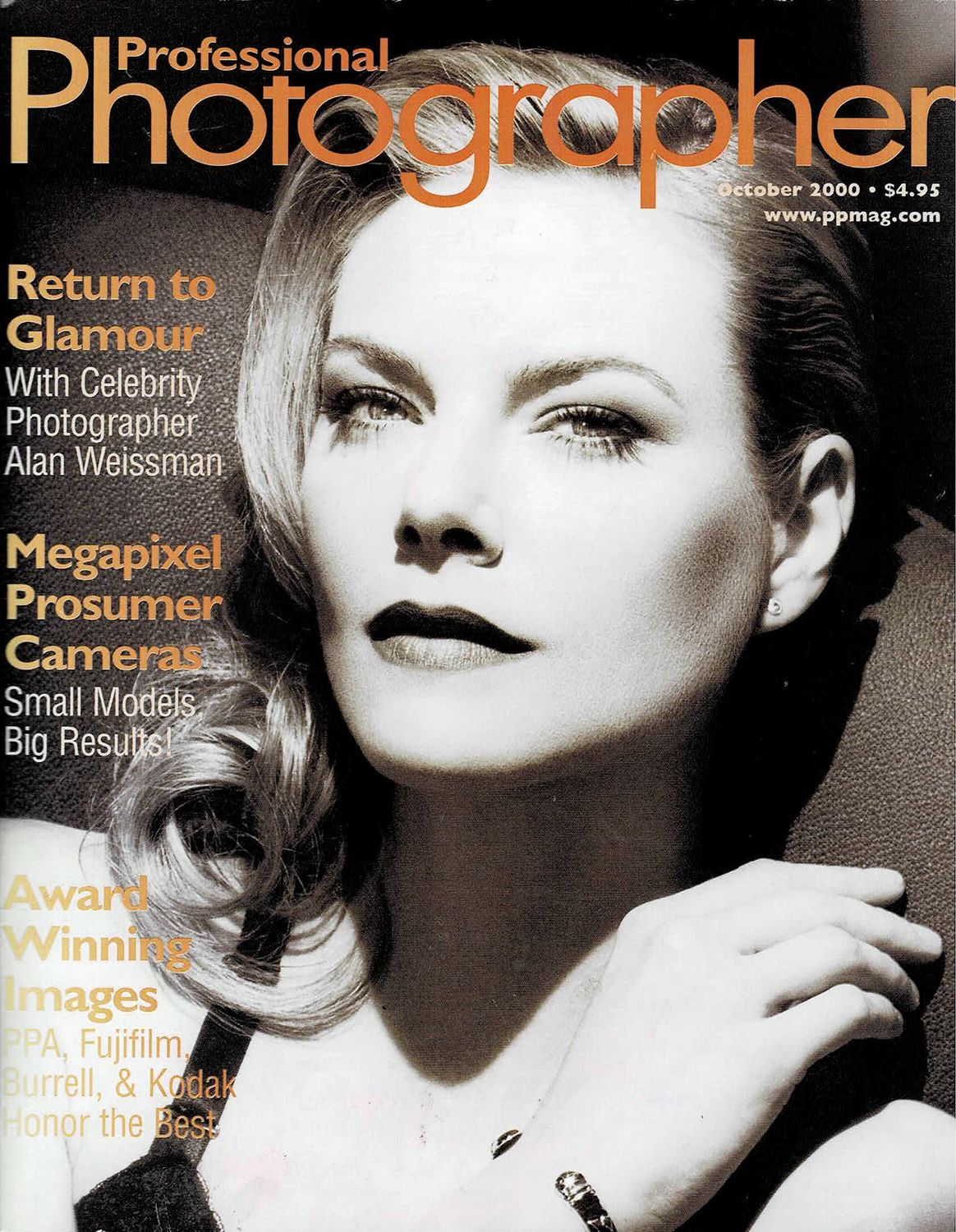 The phrase film noir conjures up images from shadowy 1940s cinematic melodramas like Double Indemnity and This Gun for Hire. The dark and mysterious world of film noir also recalls those glossy Hollywood glamour shots of screen divas like Bette Davis and Rita Hayworth, shown draped over fainting sofas in the diabolical pose of the scheming femme fatale.

“I’ve always loved the film noir look,” said Los Angeles photographer Alan Weissman, whose portraits garnered quick popularity among the celebrity set. Weissman achieves that classic ‘40s style with an assortment of lighting techniques that recall the high-contrast mystique of film noire. “When I started doing these portraits, I had just discovered a book on George Hurrell, and I tried to figure out his lighting style,” said Weissman, who didn’t own professional lighting at the time. “I used clamp-on spotlights from the hardware store, which are hard, hot light, and really the kind of lighting they used back then.”

With more experience under his belt and a wider range of equipment, now Weissman uses a mix of Mole Richardson lights, including a 200-watt Midget Solarspot and a 1,000-watt Baby Solarspot. Still, the high intensity of these lights can make clients uncomfortable. “I much prefer to use the older style hot lights,” said Weissman, “but I have learned to work with newer equipment when people are sensitive.” In such cases, Weissman uses a wide range of Norman lighting equipment, including a 2,000-watt-second flash, the FS10 Fresnel Spotlight, based on the popular Bardwell McAlister hot light. Weissman eschews flash because he can’t always see what he’s getting. But with the spots, he said, “I can see what I’m doing and really refine my Polaroids. I like to get really dramatic shadows, which help define the face.”

Weissman’s studio on Ventura Boulevard in Studio City fits in perfectly with the Hollywood vide. Two stories tall and full of windows, the studio features poster-sized images of his famous and near-famous clients. Photographs of Richard Harris and Morgan Freeman stare out of the lofty windows. The studio itself is one of the photographer’s biggest advertisements, plainly visible in a town where image is everything. Not too shabby for a former window display designer from Brooklyn, New York.

“I was a window decorator for 16 years,” said Weissman. “I gradually started shooting on the side, until one day, I realized that I had more photography work than window displays.” The constant demand for creativity in his window displays fed his artistic mind, preparing him for his future shooting style. Now, most of his shoots are off-the-cuff affairs, where anything can happen. “I never have a plan,” he laughed. “My clients just come in and we get comfortable. Then, we start shooting.”

With a few good connections and what some might call a stroke of luck, Weissman cut his teeth doing celebrity photo shoots for television networks such as Bravo, American Movie Classics, the Independent Film Channel, and Home Box Office. He also developed a steady stream of business shooting actors’ headshots. Good work is the most effective advertisement, and Weissman’s credibility quickly spread by word of mouth, as managers, agents, and the stars themselves requested him for portraits. Weissman’s portfolio includes some of Hollywood’s hottest stars and directors, including Liam Neeson, Jodie Foster, Martin Scorsese, and even the elusive Steven Spielberg.

One secret of Weissman’s success is his ability to put clients at ease. Referred to by peers and the local media as “the funniest photographer in Los Angeles,” Weissman relies on his wit and the antics of his most loyal assistant, a golden retriever named Rex, who greets clients at the door. “If I ask Rex for a roll of film or a file, he goes downstairs, grabs what I need from my studio manager, and brings it back to the client. It’s a great way to break the tension when I have stiff or nervous clients.”

Another of Weissman’s tricks is to play ‘40s classics to set the mood for the film noir portrait sessions. His playful manner also guides his shooting style, particularly his inventive lighting techniques. Using an assortment of ordinary objects to create interesting shadows, Weissman rarely creates the same setup twice, often naming the lighting configuration after the client. He might shine a light through an overturned chair or palm leaves, or maybe a milk crate or a broom stick. One of Weissman’s favorite effects is the look of sunlight streaming through a window or blinds.

“I feel like I’m painting with light and contrast. My goal is to get a three-dimensional subject to pop off of the background with near shadows. I also like to use a Norman Tri-Lite, a flash unit that projects patterns. You can put just about anything on the flash and project it out of focus to get really nice shadows and textures. Once, I pointed light through these old Day-Glo plastic beaded curtains, and I’ve used tinsel as well.”

Although Weissman has photographed numerous celebrities, on occasion he still gets star-struck. Jack Lemmon surprised him by showing up early. “I was a little nervous and having trouble setting up the lights. I kept thinking, ‘I’m actually in a room with Jack Lemmon!’ I eventually broke the ice with some goofy comments, and we just hung out for a couple hours while I snapped pictures.”

Weissman confessed to Gregory Peck during one session that he was worried about his mother, who was about to undergo a difficult surgery. Peck took the time to explain to Weissman what he should expect, Peck himself having underground the same operation. While recovering in the hospital, Weissman’s mother received an autographed get well card from Peck.

David Carradine’s session turned out to be very casual and low-key. It was Weissman’s head shots of Carradine’s wife that had led him to the studio. “David really took a liking to me. We just hung out and shot. After a while, we got a little hungry. All I had in the refrigerator was leftovers. He didn’t really care, so we were just sitting around, picking at leftovers with our fingers. I kept thinking how funny it was to be sitting in my studio, eating leftovers with David Carradine. It still seems unbelievable.

“Most of the established actors are willing to spend a little time to get to know you,” said Weissman. “I’ve had really great experiences working with greats like Jimmy Stewart, Ginger Rogers, Shirley MacLaine, and Robert Wagner. Newer people like Angelina Jolie, Alec Baldwin, and Billy Crystal show up with publicists, managers, agents. I’m so used to working one-on-one that it can be a little intimidating having all those people in the studio, looking over my shoulder.”

In the cover shot of Paula Devicq (from the television show Party of Five) Weissman wanted to emphasize the bracelet, which is a major fundraising tool for the nonprofit AIDS organization Until There’s a Cure that Weissman supports with promotional photo sessions. “She was wonderful to work with, very creative and artistic,” said Weissman. “Paula spent hours with me to get that shot, and I had her in really weird positions. But she remained very enthusiastic about it.” The print was retouched by hand and digitally enhanced with a warm, golden tint.

Weissman often shoots with a Hasselblad 503CW camera, using an 180mm f/4 CF Sonnar or an 80mm f/2.8 CF Planar lens. More often, he shoots with a Canon EOS-1N or an EOS-3 (which he claims focuses slightly faster than his EOS-1N), using either a Canon EF 70-200mm f/2.8L USM lens, an EF 17-35 mm f/2.8L USM, or an EF 28-70mm f/2.8L USM lens. For film noir sessions, Weissman uses Kodak T-Max T400 CN film because of its rich tonal handling. He occasionally uses Kodak T-Max 100 or 400 Professional film, depending on the look of the portrait he is creating. For color work, Weissman prefers Kodak Professional Portra films, often using 400NC daylight film with tungsten lights for interesting color effects, and 160NC with studio flash.

Weissman’s relationship with Kodak has grown strong over the years, particularly after he won Kodak’s first Get Exposed! photo contest, which culminated in an all-expenses-paid trip to China. (You may recall seeing his work on a box of Kodak Polymax II RC paper.) Weissman timed the trip to coincide with the American Academy of Medical Acupuncturist tour of China sponsored People to People Ambassador Tours. Weissman’s photographs of the tour, which centered around traditional Chinese medicine, were so impressive that he had a one-man show at CBS Studios. (Some of the photos are posted on Weissman’s website, www.alanweissman.com.) Upon the photographer’s return from China, People to People invited him to lead a group of photographers on a photo safari in South Africa and Zimbabwe.

Along with his beautiful images, word-of-mouth referrals have been Weissman’s best marketing tools. He’s been featured numerous times in national publications and on the local ABC television affiliate, and he’s made several appearances on local cable talk shows, even The X Show on FX Channel.

At the heart of Weissman’s work is that unforgettable film noir style. The success of this self-taught artist proves that hard work and ingenuity are still rewarded in this highly competitive industry.

A Return to Glamour