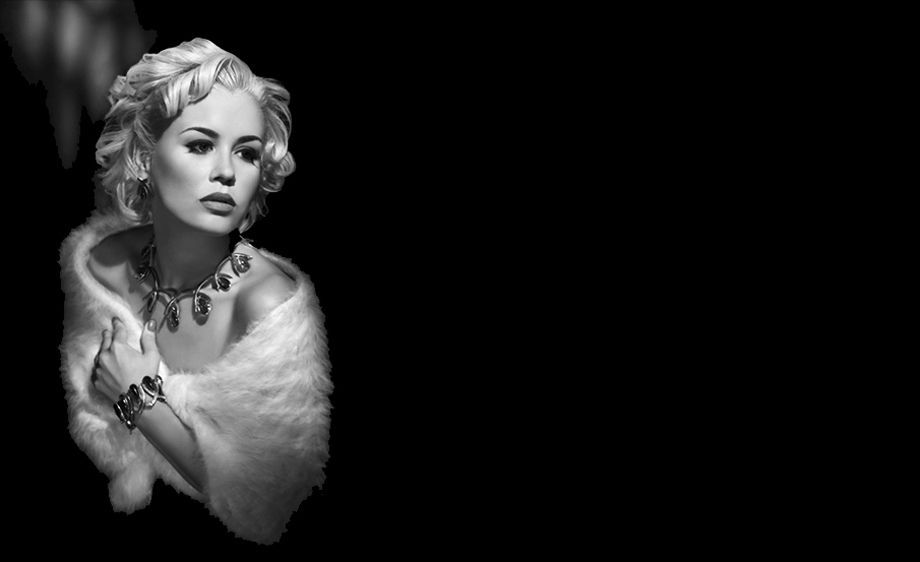 When you step into Alan Weissman’s studio on North La Brea Avenue in Los Angeles, you find yourself in a funky little showroom that’s crammed with antique chandeliers, furniture, and collectibles. The décor isn’t based on market research—it’s simply Alan’s own style. “With all the junk I collect, my studio feels like a home, but with higher ceilings,” he says. “I have curtains and old chairs and it doesn’t look like a studio. People walk in and say how relaxing it feels.”

Looking down at you from one wall is a giant picture, a 30x40 print in a big gold frame, or Alan’s dog Rex, who comes to work with him every day. Rex is holding a camera in his mouth and has film draped all over his body; his eyeballs are rolling—“People love that!”

All around you, you’re surrounded with samples of Alan’s three portrait styles—a wall of actors’ headshots, a wall of celebrity photos, and a wall full of his special “film noir” portraits that look as if they jumped off the screen of a ‘40s black-and-white Hollywood thriller.

The entire studio is about 850 square feet in size. When you enter the actual shooting area, you realize it’s a former clothing store with lots of shelves. The top shelves hold equipment, and the other shelves are filled with 11x14 prints of Alan’s work, with 30x40 prints hanging up near the ceiling.

IF YOU HAVE THE EYE

Okay—Weissman has three different styles of photography and shoots everything from tight heads to full-length portraits. He must have a roomful of cameras and lenses, right? Wrong! Alan is one of those photographers who demonstrate you can make stunning pictures without getting mired in technical details. He uses two cameras and twolenses: a Hasselblad 500C with a Sonnar 180mm f/4, and a Canon EOS 1N with a Canon 80-200mm f/2.8 zoom. He meters with a Minolta IV meter and has standardized on Ilford FP4 film rated at ISO 50 to 80, “depending.”

His prints are made on Ilford’s rich Galerie paper by Isgo Lepejian’s Custom Photo Lab and Gallery in L.A. When Alan wants a warm tone for his portfolio prints, the lab uses Kodak Sepia Toner.

He has been shooting seriously for seven or eight years now, but has been a full-time photographer for less than three years. How did he develop such a distinctive style so quickly?

“I used to be a window decorator, and I had all these spotlights, spot bulbs, and clamp-on spot-lights that I was collecting for my window displays,” he says. His wife (at the time) was a clothing designer; according to Weissman, “She needed photos to advertise her clothes, and we didn’t have any money at the time, so I decided I was going to learn how to do some ads for her. When I was learning photography I used to take these lights home and practice photographing my wife. She got really bored—it would take me hours to light a photography at the time. She used to sit there and read a magazine while I was lighting her. But the photos looked pretty good—my first shots had a feeling that looked like they were right out of the 1930s or ‘40s. Without ever having any training, I just kind of figured this stuff out. Then I immediately started picking up books by George Hurrell.”

“What I notice now is that my stuff really never did look like Hurrell—my faces might have had the feeling, but my backgrounds had a lot of shadows and a lot of stuff going on, and his work was much cleaner, with a lot less shadows, and they were just more like portraits. My backgrounds kind of look like they were window displays—I have so many shadows in them, and lots of things going on.”

Before moving into his studio about two years ago, Alan worked in his home. “I didn’t really have a place to shoot. I always shot wide open—I had a lens that was f/4, so I’d bring the lighting as close as I could, until I got an f/4 reading, and that’s how I lit it. And I still do it that way!”

Even though he has the studio now, he still believes improvising creatively. “I shoot into the corners of the wall, I shoot into the wall—I have a fireplace mantle that I schlepped back from New York City, and I throw that into a number of the photos. The other day I took one of those plastic milk cartons and put a spotlight shining through, and got a pattern of a grid on the wall. I use whatever’s around the studio . . . I’ll take a chair and turn it upside-down.”

For his film noir portraits, Alan says his customers “always give me the creative license to do what I want to do. Most of the people who come in here are not looking for that—they’re kind of surprised when they find out I do that style. They’re looking for portraits and actors’ headshots. When they come in here I always show them these pictures and say I don’t know if this is something they can use, maybe for some self-promotion, to show the casting director another perspective of what they could look like. So I say why don’t we do something that looks like an old-time Hollywood glamour portrait, and they buy it as an extra roll in the session.

“A lot of these people are either beginning actors, or people in TV series. I suggest they make the film noir portrait into a 5x7 postcard and send it out to get some attention. And it turns out some of the casting directors have been pinning these postcards on their bulletin boards and saving them.” The 5x7 postcards are made from a master 8x10 print by a photographic reproduction house.

“Makeup is really important,” Weissman continues. “We do three different types of makeup—commercial make-up; theatrical makeup, which is a step up from the commercial, a little more glamorous; and a ‘40s style make-up, very glamorous. Commercial makeup is soft and natural—when you shoot an actor, you want them to look like themselves, so when they go out on an audition, they look like the photo.”

He has a full-time makeup artist, Rita Montanez, and to keep the studio running smoothly there’s his assistant Jennifer Kays; Laura Heppert, the second assistant; and bookkeeper Nancy Ward.

WORD OF MOUTH IS KEY

So far, Alan hasn’t done too much promotion. Word of mouth is his most important medium, and he runs small ads in a trade magazine read mostly by beginning actors and has prints on display in three acting schools. He has used a publicist and had done one mailing.

He was a guest on a cable TV talk show hosted by Judy Kerr, who has written a couple books on acting. The TV appearance was very useful for generating business—“I must have gotten a dozen clients, plus referrals from them.”

“I haven’t really announced to the public that I do this style of photography, though,” he says. “I’ve been doing it for a small, select group of people. I think I’d like to take some ads out in publications that art directors read, so they can see the style, and maybe I can do some bigger-scale things.”

“I shoot a lot of celebrities, but I haven’t had many opportunities to shoot them in ‘40s lighting because I’m usually called to go do them in a hotel room or during an interview, so I don’t get to play . . . whereas when people come to my studio, I get to do what I need to do. The problem shooting celebrities is that I don’t get to meet them beforehand—they don’t really know who I am. I think my longest session was 20 minutes. It’s just a lot of nervous energy—I have to shoot really quick, and get it done.”

The last thing Alan would ever do is settle into a groove. Lately, he’s been experimenting with color, shooting daylight film with tungsten, to translate his film noir lighting into a very warm, orange-red effected.